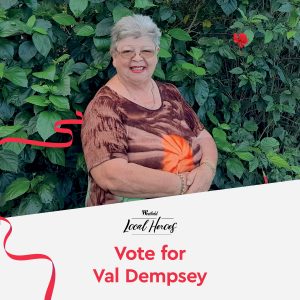 Val, affectionately known as ‘Aunty Val’ at St John Ambulance ACT, is a selfless and humble member of the ACT community, having dedicated all of her adult life to supporting the community she loves, through volunteering.

Her age and many health challenges have not been allowed to stand in her way, Val regularly contributes the single most volunteer hours each year for St John Ambulance ACT. In 2020, her 70th year, Val dedicated the highest number of hours of any volunteer, offering an incredible 717 hours of her time. This included facilitating the deployment of teams of ACT volunteers to first aid posts in NSW during the tragic 2020 bushfires.

Along with her usual St John volunteering duties at community events, Val’s compassion has seen her take a leadership role in community education volunteering. In the 1990s, in response to an epidemic of serious drug overdoses and heroin deaths in Canberra, Val created Project Survival, taking first aid education and messages into the places drug users frequented. It’s believed many lives were saved by her actions in teaching heroin users and their friends how to look after themselves and each other. The initiative was so successful, it was adopted nationally by the Community Care program. The success also prompted the creation of Project Resilience, a program taking free first-aid workshops into ACT schools, retirement villages and community groups which is still being delivered today. Incredibly, Val has found time in her incredibly busy life to support other worthy causes and organisations.

Val doesn’t do what she does expecting any reward or recognition. She’s said on many occasions, her greatest reward is in training and mentoring cadets and young volunteers and watching them develop their skills and experience over the years.

In addition to her many hours of service to St John Ambulance ACT, Val assists people in the community in a variety of other ways. She’s made more than 50 quilts for people in Canberra’s retirement and nursing homes. Val provides love and support, keeping complete strangers company as they undergo chemotherapy. She also participates in support groups for people with chronic health conditions such as the Canberra Lung Life Support Group where she’s an active participant, volunteering her experience to develop condition-specific training for members of the group with serious disabilities.

Val is always there for people in times of greatest need, a kind. compassionate and tireless volunteer who never misses an opportunity to show people they’re appreciated and never alone.

Val feels both humbled and proud to be nominated a Westfield Local Hero. “To say that I am grateful would be an absolute understatement. Through this nomination, I can promote the wonderful work at St John Ambulance ACT.”

Westfield Local Heroes are nominated and voted for by their communities, with the three top finalists per Westfield centre each awarded a $10,000 grant for their affiliated organisation. If Val is successful, she has chosen St John Ambulance ACT to use the grant to fund free first aid training in the community and to update equipment.

Vote for Val today to show our gratitude for all she does for our community!

You can vote for your Westfield Local Hero by heading to Westfield Woden Local Heroes website.

Vote for Aunty Val as our Westfield local Hero!