“I joined St John ACT in 2007 as a cadet with the Canberra Central Youth Division (CCYD). I originally joined to complete my Duke of Edinburgh Award, however, I stayed because CCYD was such an amazing experience; very supportive, great people, and a great place for personal growth. The more I got involved with St John the more I enjoyed it, as a cadet and young adult I took every opportunity to make new friends, learn new skills, grow confident in treating patients, and try something new. What I think is special about St John is the endless opportunities it offers volunteers to grow, make new friends, feel part of a community, a way to apply their skills and positively impact the community. My favourite thing nowadays is to see volunteers grow, take up new challenges, build that inner confidence and create some amazing friendships.

I volunteer across all areas of Community Programs, though primarily with Event Health Services in the past. When I say I took every opportunity in St John ACT I really mean it: I was in many leadership and training roles with cadets for seven years, I competed in three National Cadet First Aid Competitions, was ACT Youth Representative at National Conferences from 2011-2014. I was lucky with opportunities to meet four Lord Priors, five Governor Generals, make zounds of friends with young and senior volunteers around Australia and Internationally. I completed First Responder and joined the Bicycle Emergency Response Team (BERT) as a cadet in 2009, and then went on to be mentored in managing major events including music concerts, mountain biking, New Year’s Eve, the National Folk Festival, and many more. For my services, I became a Member of the Order of St John in 2016.” 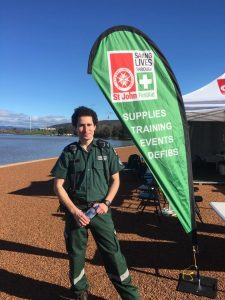 Nathanael has contributed to St John Ambulance in ACT and Victoria in many ways and his modesty has only been proven with his short summary above. Nathanael started as a St John Cadet, he has been employed by St John ACT in two different roles and obviously loves what we do because he was quick to return to the organisation after a stint interstate. He is always energetic, friendly, compassionate and a willing listener.

Nathanael has recently become the Senior Territory Officer for volunteers, and we look forward to the knowledge and experience he will bring to this role. To say we are grateful would be an understatement.